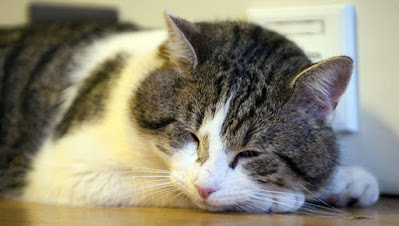 Today marks ten years since Larry the cat took up residence at 1o Downing Street, and there is still no cat flap available to him. Instead he has his own personal police officer to open the door whenever he wishes to leave or enter, as well as the attention of the world's media at all times of day and night.
As the Guardian says, Larry was the first cat to hold the rat-catching portfolio since stalwart ratter Humphrey was retired in 1997:

Lindsey Quinlan, from Battersea, said: “It seems like only yesterday that Larry came to our cattery as a stray in need of a home. I don’t think anyone back then could have imagined just how incredible his life would turn out to be.

“Throughout his time at No 10, Larry has proved himself to not only be a brilliant ambassador for Battersea but also demonstrated to millions of people around the world how incredible rescue cats are.

“His rags to riches tale is yet more proof of why all animals deserve a second chance – one minute they may be an overlooked stray on the streets, the next they could become one of the nation’s beloved political figures, with fans around the world.”

During his tenure, Larry has been a trusted companion to three prime ministers, beginning with David Cameron.

Despite rumours he disliked the feline, Mr Cameron, in his final speech to parliament, confirmed the pair were friends and said: “Sadly, I cannot take Larry with me – he belongs to the house and the staff love him very much, as do I.”

Larry stayed on to offer his support to Theresa May and was notably caught live on camera being forcibly removed from his sunbathing spot and escorted away by security to ensure he would not upstage her outgoing announcement.

The 14-year-old now works under Boris Johnson and in December 2020 was seen adding to the Brexit drama by getting caught in a scuffle with a pigeon.

The tabby stalked the bird outside the prime minister’s official residence as members of the press – who were waiting to hear from Johnson – watched on with their cameras poised.

He has met a number of world leaders, including President Barack Obama who visited in 2011. Although Larry is normally unfriendly towards men, he did not appear to mind Obama.

When the next US president, Donald Trump, visited in 2019, Larry was seen creating a potential security threat by taking his afternoon nap under Trump’s car.

Even something as simple as getting caught in the rain was enough to melt the hearts of the nation, and in 2018 video of a damp Larry being escorted through the front door by a kind policeman went viral.

There is no doubt, it is Larry who is really running the country.