Did Hain claim for his Aga? 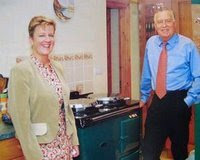 All of this immediately reminds me of the time Mr. Hain appeared on the Aga website proudly displaying his new oven for all to see. Alas, it soon disappeared from their website and even the cached version is no longer available, although I have preserved the photograph for posterity.

This raises an interesting question. Did the taxpayer pay for Mr. Hain's Aga?

Update: Peter Hain's office has just rung to say that the Aga was already installed in his property when he bought it. The £1,000 was for the purchase and installation of a cooker and hood from Comet.

Comments:
Nice to know that this blog is important enough for Peter hain's office to monitor . . . .

If Tango Man has paid a grand for a cooker hood from Comet, he's been done (or we've been done)