Anatomy of a conspiracy

At long last Trump has agreed to let the transition go ahead and Biden will be able to access Federal funds to put in place a more sensible and stable government in the United States. That has not, however, prevented his supporters and him continuing to hawk around their conspiracy stories as to how the election was stolen from him.

For those interested in how these stories emerged and the role of social media in spreading them, then I highly recommend following the Twitter account of Marianna Spring, who is the BBC's specialist reporter covering disinformation and social media. Having listened to one radio interview on BBC this morning I think more of her colleagues should be reading her.

Marianna has a blog here, in which she examines the roots of this election fraud conspiracy story. She says that for months before a single vote was cast, allegations of "rigged elections" and "voter fraud" have been punctuating people's Facebook and Twitter feeds:

Research by the BBC's Anti-disinformation unit reveals that disinformation about voter fraud has been plugged by influential accounts on social media repeatedly, for months.

And it came from the very top. President Trump first started tweeting allegations of fraud as far back as April.

Between then and the election, he mentioned rigged elections or voter fraud more than 70 times.

She provides these examples from June and August: 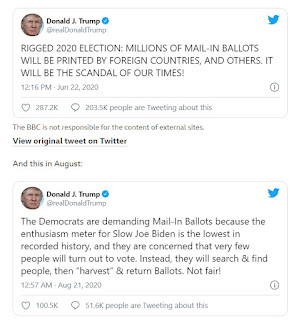 She adds that it is not a new theme, Trump made claims of voter fraud back in 2016, an election he won:
But this time around, the evidence suggests many more people have been seeing unsubstantiated claims all over their social media feeds for weeks. Candy is just one of them. Hundreds of thousands joined big Facebook groups under the "Stop the Steal" banner.

But this time around, the evidence suggests many more people have been seeing unsubstantiated claims all over their social media feeds for weeks. Candy is just one of them. Hundreds of thousands joined big Facebook groups under the "Stop the Steal" banner.

Our research found that influential right-wing accounts were instrumental in amplifying these claims - and were frequently retweeted by President Trump. That includes a number of figures with big followings who have gone on to be involved in a protest movement centred around the unsubstantiated idea of a "rigged" election.

On election night the hashtag #StoptheSteal sprung up on Twitter after the first of many misleading videos about voter fraud went viral.

The video showed a poll watcher being denied entry to a Philadelphia polling station. It has almost two million views on Twitter, and was shared by multiple pro-Trump accounts. We investigated the video shortly after it was posted.

The man who features in it was asked to wait outside by officials - with a woman telling him that his poll-watching certificate was not valid at that particular polling station.

The video was authentic and, as it turns out, the woman was wrong. There was confusion over the rules. Poll watchers used to only be allowed into a particular station in Philadelphia, but they can now visit multiple sites across the city.

The situation was later clarified and the man was later allowed into the station, and given an apology. None of that was reflected in the video of course - and the hashtag had already gone viral.

The Stop the Steal slogan was then used by those setting up large Facebook groups which, since election night, have cumulatively amassed more than a million members.

Several of these groups have been removed after users posted threats of violence and calls for "civil war".

They have become a hotbed for more misleading videos and false claims - similar to that incident in Philadelphia - which have flooded social media feeds of people like Candy.

This and many more memes are slowly undermining the democratic process in the United States and it is the current President who is both leading and encouraging them. It is only a matter of time before similar tactic find their way into the UK.

Comments:
Yes, as a party we will have to monitor the internet from January to counter misleading info aimed at the council elections, for as mentioned it starts months before a vote.