As if it were not bad enough that Donald Trump is using the apparatus of the state to try to secure his re-election through voter suppression and lies, it transpires that this particular virus has now started to infect the British state as well.

It all started innocently enough: it was Japanese week on the Great British Bake Off and the person in charge of the Department for International Trade's twitter account decided to use the opportunity to promote their new trade deal with the Japanese, which er...secures for the UK the same terms of trade as we already enjoy as part of the EU. So, twenty eight minutes into the programme, they tweeted: 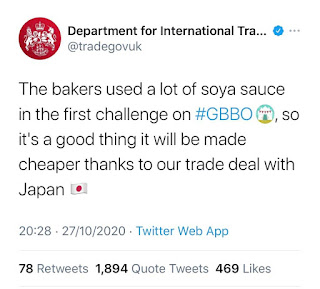 Unfortunately this is simply not true. Firstly, it is soy sauce, not soya sauce, secondly most of the soy sauce we buy comes from the Netherlands with a zero tariff, so no change at all.
Thirdly, it is cheaper to ship and produce in Netherlands, which is closer to us than Japan. Fourthy, Netherlands soy sauce will be more expensive after Brexit because there will be tariffs on it.
Fifthly, we do not and never have traded with Japan on WTO terms as the Department for International suggested in a subsequent tweet.
Finally, Japanese soy sauce is much more expensive, so even with zero tariffs the price of soy sauce will go up.  So essentially we have a government twitter account promoting misinformation and lies.
I will leave the final word to Professor Brian Cox, who chose to parody the twitter exchange: 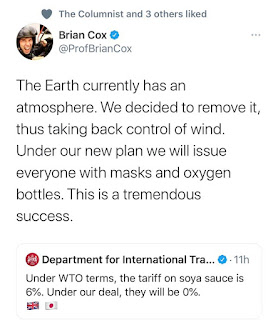 I hope somebody is asking questions this morning about how this nonsense got out there in the first place.
# posted by Peter Black : 9:37 AM