Goats but no bears 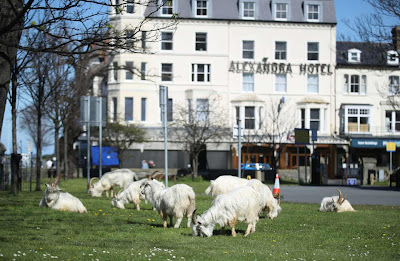 It may be April 1st but this story in the Guardian is not an April Fool joke. I remember the goats in Llandudno from my childhood - we used to holiday there every year. They are descended from the goats of the mountains of Kashmir and live on the Great Orme but were always too shy to venture into the town because of all the people there.

Now the 'town is coming like a goats' town... All the clubs have been closed down... ' and people are self-isolating they have ventured far and wide and are snacking on grass and hedges all over the town centre.

The police have tried to be 'goat busters' but have failed to prevent the invasion, and why should they? After all, nobody else is going to be cutting the grass. People complain about kids congregating didn't mean these, but we have a nanny state, like it or not.

Meanwhile, this story about bears returning to the deserted village of Llanawrthmawr (Big Bear Parish) is an April Fool joke. The village is fictional, as is Town Councillor Ebrill Siriol, who is quoted as saying the bears haven’t been seen roaming the streets in centuries.

Ebrill Siriol is Welsh for April Fool. You have been warned.