How to undermine a household brand 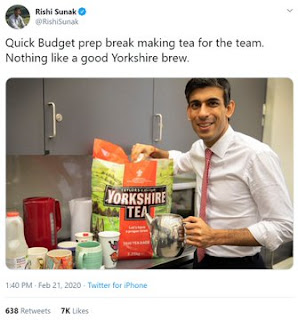 Nobody is saying that the new Chancellor of the Exchequer is toxic, after all even us political geeks can barely remember his name, but it might not have been a good idea to alienate a well-known household brand in the first few days of his tenure, even if he does represent a Yorkshire constituency.

Of course the first thing that sprung to my mind when I saw this picture was a question: he does know that Yorkshire tea is not grown in Yorkshire, doesn't he? However, others saw it differently and the poor handler of the brand's twitter account was inundated with offensive messages following the publication of the chancellor's tweet.

This prompts other questions: why is the twitter-sphere so awful, why do its members lack all sense of proportion, and what was it exactly that made many on there think that a politician pictured in the process of making a cup of tea meant that the makers of that tea actually endorse him and all he stands for?

Nevertheless, as the Independent reports, the Harrogate-based company – which had nothing to do with the photo – found itself bombarded with a stream of online vitriol from people purportedly antagonised at the notion someone who does not share their political views might drink the same tea as them - boycotts were called for; demands for apologies made.

They say that the family-owned company appears to have caved into the pressure and distanced itself from Mr Sunak, who won his seat of Richmond with a majority of 27,210:

“We weren't asked or involved,” the company wrote of the picture.

It continued by making an in-vogue call for kindness online.

“On Friday, the chancellor shared a photo of our tea. Politicians do that sometimes (Jeremy Corbyn did it in 2017),” it wrote. “We weren’t asked or involved – and we said so the same day. Lots of people got angry with us all the same.

“For some, our tea just being drunk by someone they don’t like means it’s forever tainted, and they’ve made sure we know it.”

The curator of the account said they had “spent the last three days answering furious accusations and boycott calls” while some people had tried to pull the brand into “a political mudfight”.

“It’s easier to be on the receiving end of this as a brand than as an individual,” the thread said. “There’s more emotional distance and I’ve had a team to support me when it got a bit much. But for anyone about to vent their rage online, even to a company – please remember there’s a human on the other end of it, and try to be kind.”

Perhaps people just need to get some perspective.