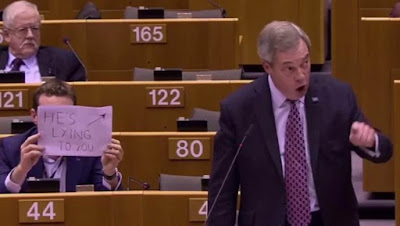 Whatever the outcome of the talks over future trade deals with the EU, we can never cease to be Europeans nor can we completely abandon the principles set down by Winston Churchill of greater cooperation and joint working in an effort to avoid further European wars.

From a European perspective I suppose it will take some time to try and rub out the memory of the rancour and bitterness brought to the democratically elected European Parliament by Nigel Farage and his various parties, the racist messages put out by his 'Leave' campaign during the referendum, and the many scandals that hit a large number of the elected officials who served alongside him.

Indeed the picture above, sums up the regard that many MEPs held for Farage, which is why it is unsurprising that it is now to go on display in a Brussels museum.

The Independent reports that House of European History, which tells the continent’s story from emergence to integration, will include the object in a special exhibition about Brexit from later this month.

The sign will be displayed alongside other objects and documents related to Britain’s contribution and departure from the European Union. Last Friday the UK’s flag outside the European parliament was hauled down and taken to the museum for safe-keeping.