Brexit: is it worth it? 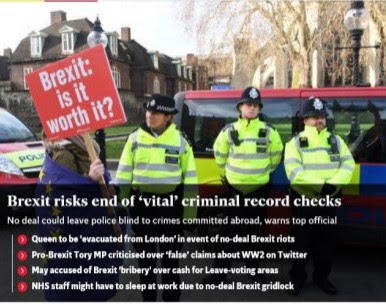 As if watching the news was not bad enough, today's Independent seeks to depress us even more with a series of headlines, which underline the depths to which our politics has sunk.  Switching from the banal to the serious, these latest developments in the Brexit saga tell us exactly why we have become a laughing stock in the world. It sounds even worse when you listen to the way this American TV presenter describes the dilemma we are in.

And the graphic doesn't even cover this story on the BBC, that Nissan is expected to announce that it is cancelling a planned investment at its plant in Sunderland. In 2016 the car maker said it would build the new model of its X-Trail SUV in the UK after receiving "assurances" from the government over Brexit. The Japanese company is expected to say investment will be now be pulled, rather than existing work being halted.
This is what Leave UK tweeted in October 2016, when the future of this investment was being questioned:


Project Fear claims Nissan would scale back UK operation could not have been further from the truth! #BrexitBritain

Another strike-out for the people with the cracked crystal ball, who first brought us a bus pledging £350 million a week for the NHS and many other magnificent works of fiction, but back to the Independent.

The paper tells us that Rob Price, head of the Acro criminal records office, has warned dangerous criminals could go free in the UK after Brexit if police officers cannot access European conviction records. He said EU conviction records are “critical” to decisions on whether to charge or release foreign suspects, and how to protect the public.

There is a concern that this access will be switched off on 29th March. But, yes we did actually warn that this might happen during the referendum campaign.

Then there is the suggestion that the Queen would be evacuated from London if riots broke out following Brexit. Rumours that she will be in a fast car driven by Prince Phillip have not been substantiated.

The stories come thick and fast, including the claim that NHS staff could be asked to sleep at work if traffic is gridlocked in the event of a no-deal Brexit, according to contingency plans being drawn up by one Kent trust. Okay, they are reaching a bit here, but the big concern with the NHS remains that the current crackdown on EU citizens and migrant workers could leave many hospitals short-staffed.

But finally we have two stories which illustrate more than any other how broken our political system is, with an out-of-touch and impotent Parliament and ignorant MPs spreading their prejudices around as if they had been carried down Mount Sinai, carved on stone by Moses himself.

The Independent tells us that John McDonnell has accused Theresa May of launching a “dangerous” bid to win backing for her Brexit deal after it emerged the government is considering providing a cash injection to areas that voted Leave in the 2016 referendum in an attempt to win Labour MPs’ support.

And then we have the tale of the pro-Brexit MP, who has been criticised after making false statements about Europe and Britain after the Second World War:

Daniel Kawczynski claimed in a tweet that there was "no Marshall Plan for us only for Germany", referring to American payments of more than £12bn approved in 1948 to help rebuild Europe after the end of the war.

"Britain helped to liberate half of Europe. She mortgaged herself up to eye balls in process. No Marshall Plan for us only for Germany. We gave up war reparations in 1990. We put £370 billion into EU since we joined. Watch the way ungrateful EU treats us now. We will remember," he tweeted.

Hundreds of people reacted on the social media site and pointed out that Mr Kawczynski was factually incorrect.

Dr Warren Dockter, an American expert in British history and lecturer in international politics at Aberystwyth University, quoted from The Marshall Plan: Fifty Years After, a seminal academic book on the subject, and said Britain received 26 per cent of Marshall Plan aid, more than any other country.

This is the same MP who, as I reported 10 days ago, formally asked Poland to veto any extension of Article 50, effectively requesting a foreign power to intervene in our domestic affairs and override our sovereign Parliament. You really cannot make this stuff up.

There is much more going on around Brexit of course, and most of these stories play into Theresa May's narrative of demanding MPs vote for her deal to avoid going over a cliff at the end of March. Nevertheless, it is hard to escape the feeling that the whole country is on the verge of a massive nervous breakdown.

Comments:
Who gains the most from brexit,the ordinary person or the super rich.?