Are Welsh domestic abuse victims being let down? 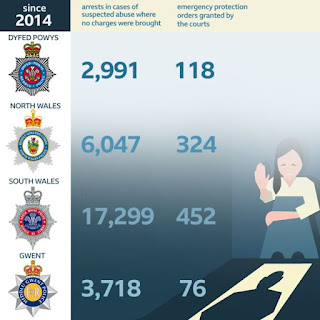 The story of one woman who was assaulted by her ex-husband and says she feels "let down" by officers who she says could have used an order to prevent the attack has triggered an important debate about the attitude of police forces to such incidents and whether the tools available to them are effective enough and/or used properly.

The BBC report that since 2014, officers have been able to get a 28-day emergency protection order in cases of suspected abuse. But Welsh forces used them in just 3% of 30,000 cases where arrests were made but no-one was charged:

Officers are able to gain the protection order when they arrest someone, regardless of whether they are later charged, but have only used this power 970 times in 30,000 cases since 2014.

Welsh Women's Aid said the orders give women "breathing space", however it added that they are often breached because officers are "slow to respond" and may not take them seriously.

"These protection orders are only going to be as good as the support and protection that they give the survivor," said the charity's Gwendolyn Sterk.

The charity has called for breaches to be made a criminal offence.

In some respects this is a resource issue, but when a protection order is sought it is absurd that any breach is not punishable as a criminal offence. Victims deserve far more protection than this and, in many cases, for police forces to take their plight more seriously and to act more expeditiously.