Labour aiding and abetting the Tories

I am back after a week in Snowdonia and North Wales and nothing appears to have changed. Boris Johnson is under investigation for insulting and racist remarks about Muslim women, playing the Trump-spark-outrage-for publicity card in his bid to succeed Theresa May, whilst Jeremy Corbyn is still aiding and abetting the Tory hard Brexit by refusing to acknowledge and back the increasing demand for a final referendum on any deal the UK Government can negotiate.

When we have the current Trade Secretary asserting that a no-deal exit is more likely than a negotiated agreement with the EU, we get an idea of the sort of chaos that is raging at the heart of government and the sheer incompetence of Ministers in promising big and then failing to deliver. Let us not forget what they said at the time: 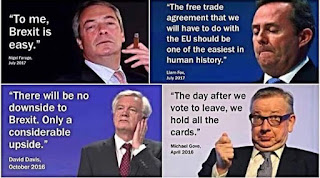 In these circumstances, when there is no majority in the House of Commons for a way forward, and with opinion polls showing that the public want another vote, the most logical stance for the official opposition would be to press for that plebiscite to take place.

The Guardian reports that major new polling of 10,000 people suggested Labour voters back a second referendum by 63%, with just 8% opposed, in one of the largest surveys of public opinion since the referendum to leave the European Union. The research by the People’s Vote campaign, which supports a referendum on the final deal with the option to remain, suggested Labour voters would back staying in the EU by a margin of three to one if the poll was rerun.

In addition about 130 constituency Labour parties are understood to have expressed willingness to back a motion in favour of a second vote, drafted by the pro-Corbyn campaign group Labour for People’s Vote.

And yet, instead of embracing the opportunity to debate a way forward the Labour leadership are seeking to stifle the motion. So much for the democratic process and open debate that Corbyn had previously embraced and on which he built his backbench career.

Comments:
When you have passionately fought for your belief that the EU is evil and you climb the greasy poll to the top (Corbyn) it will stick in the throat to have to change your belief after years of that belief. Crunch time will have to come to him and the party eventually and get off the fence.