Where to draw the line that Tory MPs should not cross?

Like many other people today, including most Tories, I am outraged at the actions of two Tory MPs in effectively talking out a bill on Mental Health before forcing a private members bill that had the full the support of the Prime Minister. and which sought to outlaw up-skirting, into an uncertain purgatory through the simple use of one word - 'object'.

As the Guardian reports, the voyeurism (offences) bill on upskirting, the taking of surreptitious, sexually intrusive images, was put forward by the Liberal Democrat MP Wera Hobhouse after a campaign by Gina Martin. Police have declined to prosecute a man Martin accused of taking underskirt pictures of her on his phone at a music festival in London last summer:

As a private member’s bill it would normally have little chance of becoming law. But early on Friday the justice minister Lucy Frazer said the government would back it.

However, when the deputy speaker Lindsay Hoyle read out the name of the bill later that day, the Tory MP Christopher Chope shouted: “Object”. Without sufficient time in the session for a proper vote it was sent back for another try on 6 July.

The MP for Christchurch also used the Commons session to delay another government-backed bill, which would make it an offence to attack police dogs or horses, or prison officer dogs.

Both were among a series of private member’s bills being given their second reading in the Commons on Friday. If no MP disagrees they are passed without a vote and can be given a date for their third reading. Last year Chope proposed 47 private member’s’ bills of his own.

According to social media, Christopher Chope has form on winding people up with his views. In October 2010, he hosted a meeting of climate-science-sceptics at Westminster. In January 2013, he came under fire for referring to some staff at Westminster as 'servants'. He opposed the minimum wage and voted against legislation for same-sex marriage.

In June 2013, Chope was one of four MPs who camped outside Parliament in a move to facilitate debate on what they called an 'Alternative Queen's Speech', an attempt to show what a future Conservative Government would deliver. Forty two policies were listed including the reintroduction of the death penalty and conscription, privatising the BBC, banning the burka in public places and preparation to leave the European Union.

In 2014, Chope and six other Tory MPs voted against the Equal Pay (Transparency) Bill which would require all companies with more than 250 employees to declare the gap in pay between the average male and the average female salary. He delayed a bill to pardon the second world war code breaker, Alan Turing and in 2013 he tried to block a debate on the Hillsborough disaster.

He has persisted with such aberrant behaviour with hardly a peek from his fellow Tories, until yesterday when he went too far even for the most ardent right winger. Tory MP, Simon Clarke tweeted: “Chris Chope has embarrassed himself with his actions in parliament today, and does not speak for me or Conservatives on the disgusting issue of upskirting.”

Fellow Conservative Paul Masterton said: “Do not underestimate just how furious many Tory MPs are about this. This kind of thing does far more damage to the public’s view of our party than endless debates about customs arrangements.”

What is clear from those quotes however and the following WhatsApp conversation, is that it was not the issue that was upsetting most Tories but how it will play out in public: 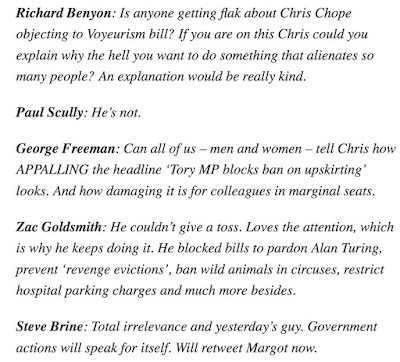 For many Tories it appears that the line that should not be crossed has nothing to do with what is decent and right, but what will embarrass the party and lose them votes. Heaven-forbid that principle should get in the way.

Comments:
What would you expect from such low life's as Tories
If it does not make them money they do not want to know