Is Welsh Labour capable of reforming?

With a leadership contest pending, the move to reform Welsh Labour's voting system to bring it in line with other elements of their UK party has suddenly become more urgent.

As the BBC report, the recent election of a deputy leader for the Welsh Labour Party reinvigorated the debate about the influence of the Trade Unions and the rather bizarre electoral college, a debate that was last live when Rhodri Morgan was defeated by Alun Michael for the leadership back in 1998.

The controversy may have something to do with the fact that the losing candidate won a bigger share of the vote amongst ordinary members than her triumphant rival.  There are now calls for the planned twelve-month review of Welsh Labour's electoral college to be accelerated so that whoever succeeds Carwyn Jones has the clear support of the much-enlarged Welsh Labour membership.

Local Government Secretary, Alun Davies sums up the case on his blog:

'It was immediately clear that the electoral college could not be used to elect our new leader. I hope the Welsh Exec will now move quickly to ensure that we have a democracy where people feel empowered in the debate over the future direction of the party. For anyone with any doubts let me be clear: the argument over OMOV is won. And those who still have objections would be best advised to find a way of coming to terms with this new democracy rather than finding novel, inventive and bureaucratic devices to obstruct the clearly-expressed will of the party.'

But is the Welsh Labour Party capable of reforming itself at this pace? Not if the Trade Unions have any say in the matter. They have put out a statement making it clear that they are not going to give up their influence within the party that easily: 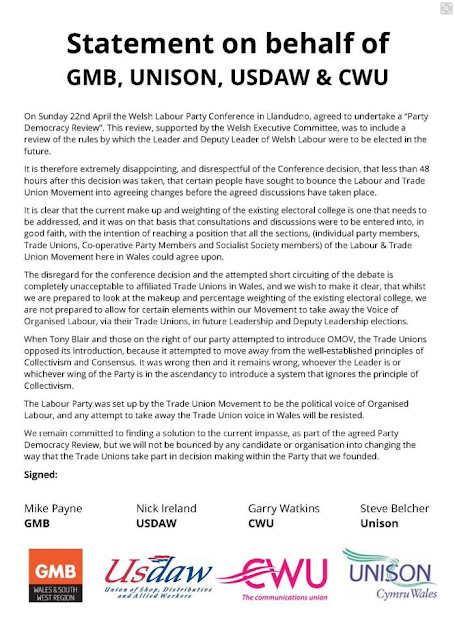 If unions are digging their heels in then it is likely that the One Member One Vote system that elected Jeremy Corbyn as Labour Leader twice, will not be used to choose a new Welsh First Minister. That leaves open the possibility that whoever wins will not have the backing of a majority of Labour members. What does that say about Welsh democracy?