Should Norway just grin and bear it?

I suppose that in a week in which the President of the United States has branded dozens of countries as 'shitholes', a minor spat between Norway and Australia can easily be ignored. And so it would be, if it wasn't so amusing.

The origin of the non-row lies in official advice given by the Australian Government to its citizens thinking of journeying to the northern reaches of Europe. As the Telegraph reports, Smart Traveller, which appears to be an official Australian Government travel advice website, advises that there 'are risks for travellers to the arctic archipelago of Svalbard relating to avalanches, glacier accidents, boating incidents and polar bear encounters. The level of our advice has not changed. Exercise normal safety precautions in Norway.'

Norway, however is having none of it. They tweeted in reply: 'Thank you #Australia for your concern. We can assure you that in mainland Norway all polar bears are stuffed and poses only limited risk.' and followed it up with this: 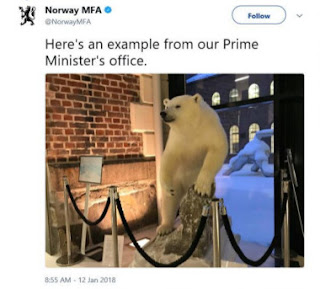 Of course Australia was actually referring to the Norwegian archipelago of Svalbard, better known by its Dutch name Spitsbergen, meaning "jagged mountains". These islands lie in the Arctic Ocean, north of mainland Europe, about midway between continental Norway and the North Pole.

As Wikipedia records, the islands were first taken into use as a whaling base in the 17th and 18th centuries, after which they were abandoned. Coal mining started at the beginning of the 20th century, and several permanent communities were established.

The Svalbard Treaty of 1920 recognizes Norwegian sovereignty, and the 1925 Svalbard Act made Svalbard a full part of the Kingdom of Norway. They also established Svalbard as a free economic zone and a demilitarized zone.

It goes on to say: 'Svalbard is a breeding ground for many seabirds, and also features polar bears, reindeer, the Arctic fox, and certain marine mammals. Seven national parks and twenty-three nature reserves cover two-thirds of the archipelago, protecting the largely untouched, yet fragile, natural environment. Approximately 60% of the archipelago is covered with glaciers, and the islands feature many mountains and fjords.'

So technically both countries are right. There are no live polar bears on the Norwegian mainland, but there are in Svalbard. Still, the publicity will not have done Norway any harm.