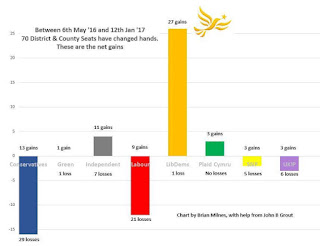 There were just two Principal Council by-elections last night and the Liberal Democrats won both of them, taking Sandhill in Sunderland off Labour from fourth place with a 41.5% increase in our vote and winning Gade Valley in Three Rivers off the Tories and taking overall control of the council with a 24% increase in our vote.

It is a sensational start to the calendar year, carrying forward the momentum from 2016 the Lib Dems have now made a net gain of 26 Principal Council seats. Tim Farron sums it up:

We finished 2016 winning by-elections and tonight we have shown that the Lib Dem Fightback is going from strength to strength. Since May 2015 we have now gained over 20 council seats and won a parliamentary by-election in Richmond Park.

Thanks to the hard work of local campaigners and great candidates we have gained two new council seats and control of a council.

Tonight we gained seats from both the Conservatives and from Labour. People up and down the country want to see an open, tolerant and united UK. It is the Liberal Democrats who are standing up and representing them, we are the real opposition to this Conservative Brexit government.