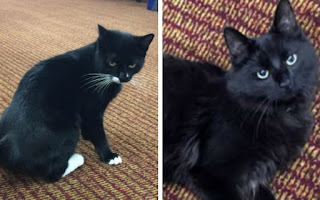 The Telegraph reports that the number of cats residing in Downing Street has now risen to five with the addition of a black-and-white cat called Evie and another called Ossie to deal with the mouse problem in the Government offices.

They join Gladstone, the Treasury's cat, Palmerston the Foreign Office mouser and Larry the Number 10 cat on the street.

The cats are not having it their own way of course as the Chancellor, Philip Hammond has moved his dogs into Number 10, where he lives with his wife. However, he has had to lock the dogs away to protect them from ferocious Larry:

“The dogs are not free to roam around the house. The cat is all over the place,” said one friend. “Larry fights, he is pretty feisty. The dachshund is pretty small and I am not at all sure if it really came to a punch up who would come off best.”

At this rate we will soon have enough cats at the heart of government to form a cabinet. Perhaps they could advise the clueless UK Government on their Brexit strategy.

It is possible that the collective wisdom of all five cats might make a better fist of it than Boris, Liam Fox and David Davis.

And if they fight, as they are inclined to do, then it will feel just like any other cabinet meeting.

Comments:
I'm sure 'Palmerston' would not be saying Britain is back East of Suez. The Downing Street cats would want the £3bn spent on Whiskers back at home - a view that would be widely welcomed I'm sure.