How man-made climate change was predicted over a century ago 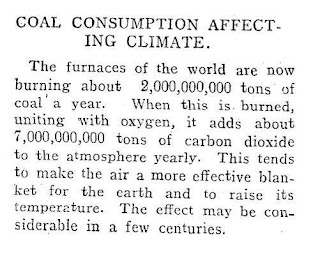 There is a fascinating article in the Independent today in which they feature a newspaper clipping from 1912 in which the inevitability of man-made climate change was outlined:

The clip was printed in a New Zealand paper, the Rodney and Otamatea Times, Waitemata and Kaipara Gazette, on 14 August 1912. Fifteen years after the piece was published the world’s carbon emissions reached 1 billion tonnes a year.

The clip highlighted the negative effects of burning coal, such as increased temperatures - owing to the large amounts of carbon dioxide burnt into the atmosphere.

As Quartz explains, scientist Joseph Fourier discovered that the earth’s temperature might have been regulated by the earth’s atmosphere in the 1820s. Forty years after he died the evidence was proven by John Tyndall who discovered that certain gases trap carbon dioxide and heat. However, Tyndall was proven to be inaccurate as he did not focus on coal being burnt – his focus was on mining.

If only we had heeded the warnings given 104 years ago.

Comments:
I just wonder what it will be like in fifty years down the line..the amounts of CO2.
I think the answer is to plant trees like mad- a type of intensive afforestation in all available land to try and achieve some balances. Organisations like the UN and EU should lead the way.