Meanwhile in other cat related news 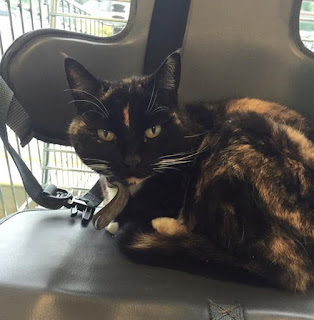 As Larry and Palmerston have proved one of the charms associated with cats is their ability to pop up in the most unusual places and look very cute whilst doing so.

According to Walesonline this particular moggy has been practising these dark feline arts in the Sainsbury's store in Thornhill, Cardiff.

She has become such a feature at the entrance to the store that customers, afraid that he was being cast out by management, got together to collect a 500 signature petition urging that she be allowed to stay put.

Happily, management had no such plans. The petition said: "She (the cat) has been visiting there for over a year . She does no harm and never enters the store. She is quite a character and has a following on Facebook . The majority of customers love her. She brings a smile to our faces."

Yes, you read that right. She has her own Facebook page, here.

The paper says that some shoppers have complained and the company has asked for people not to feed the cat. They are though happy for her to stay as long as she keeps away from the counters.

A spokeswoman said: "Lots of our colleagues and customers love having our feline friend around the store. We have spoken to her owner who agreed to take her home if her behaviour is less than purr-fect.”