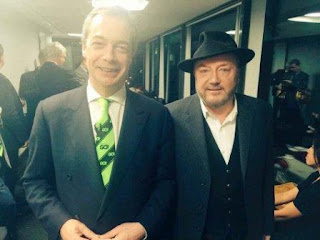 The unlikely sight of Nigel Farage and George Galloway, almost arm-in-arm at last night's anti-EU Grassroots Out rally must have put off many people from the cause they are now locked into together. And according to The Independent their joint appearance certainly has an impact.

The paper says that over a hundred people reportedly walked out as George Galloway took to the stage as the event's special guest speaker:

The appearance of the Respect Party leader prompted shouted complaints from many people at the QE II Centre in Westminster where supporters of Grassroots Out campaign (GO!), a movement urging Britain’s exit from the EU, gathered as the Prime Minister held negotiations to secure an EU reform deal on Friday.

According to reports on Twitter, boos and jeers were heard from the audience as Mr Galloway began to speak, which was dominated by Conservatives and UKIP members.

Organisers were witnessed by the Huffington Posts’s Owen Bennett telling security to guards to “shut the doors” to prevent a mass exodus.

Of course this campaign will throw up strange bedfellows on both sides, but I would be very surprised if we get anything more bizarre than Galloway and Farage making common cause.

The good news is that the erstwhile cat impersonator is marmite to many people and his appearance at events like this can only do the anti-EU cause harm. Hopefully, that bad karma will also rub off on Farage, whose judgement continues to be suspect, not least in his choice of allies.

Comments:
With Galloway on board "outers" should beware an anti-semitic tinge to their campaign in future.