Mourning the tragic loss of a great Liberal Democrat 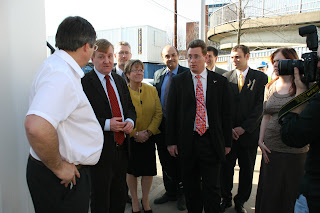 I am absolutely devastated this morning at the tragic death of the former Liberal Democrats Leader, Charles Kennedy. He was a much-loved politician, both within and outside the party, a man of great political courage and huge talent.

I remember going on a walkabout with him in Swansea City centre (above) and being astonished at both the ease at which he interacted with people and the recognition and affection shown to him by complete strangers.

That he was not afraid to stand up for what was right was demonstrated firstly in the way he walked away from David Owen's SDP rump to help form the Liberal Democrats, and also in the way that he stood up as the only mainstream political leader to oppose the Iraq war.

He was my party's most successful leader, taking us to record numbers of seats in 2005. His humour and humility were legendary. He was a warm-hearted, witty, principled man who will be greatly missed.

My thoughts this morning are with his family, friends, and colleagues.

Comments:
I agree that Charles' Kennedy's passing is a tragedy, the best Liberal(Democrat)leader in my lifetime, both due to the personal attributes that you highlight and his positioning of the party closer to the left.

He was apparently also the only LD MP, who couldn't bring himself to vote for the coalition. With hindsight, perhaps as sound a judgement as his principled stance against the Iraq war has already proved to be.