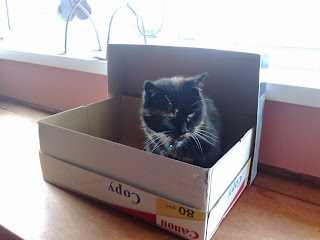 The Independent reports on the outcome of research by scientists that seems so obvious that I am surprised that they got funding for it. They have 'discovered' that there are two broad reasons why cats crave their own little cardboard castles.

They say that the primary reasons are that boxes provide shelter from stress, and that they keep cats warm:

According to a study conducted at Utrecht University in the Netherlands, boxes make cats less stressed because they are less likely to be pestered when hiding in them.

In this wild these small hiding places would have been a place to relax away from prey, but in a modern home puss is more likely to be avoiding an unwanted stroke from an owner.

Alternative places cats can hide include under tables and chairs, where they can’t be annoyed or pestered.

Another set of research conducted in 2006 by the National Research Council found that boxes can help keep a cat warm.

Cardboard boxes are usually made of multiple layers of card to provide strength, which makes them a good insulator for cats who like to stay warm.

The animal psychology behind keeping warm in a box is similar to why cats sleep on cushions or why they like to lie in the sun rather than the shade.

So next time you see your cat chilling in a cardboard box, there’s a good chance they probably don’t want anything to do with you but wish you would turn the heating up.

I dont suppose they could have saved us all money by just asking people who choose to live with cats.