According to the BBC Labour have renewed their attack on bankers by urging Chancellor George Osborne to block any attempt by Royal Bank of Scotland  to pay bonuses of up to double its bankers' annual salary.

They have tabled a Commons motion calling on the government, which owns 80% of RBS, to reject any such move. They are also calling for more competition in banking. Both of those issues are being addressed by the Government though not quite in th way the Labour Leader wants.

The BBC's political editor, Nick Robinson, said the move by Labour was part of its attempt to say that the prime minister and his chancellor "stand up for the wrong people".

On Friday, Mr Miliband is expected to flesh out details of a proposal made last year to force the big High Street banks to sell off branches, the BBC understands.

He wants to promote the growth of new banks that could challenge the "big five" - Royal Bank of Scotland, HSBC, Lloyds, Barclays, and Santander.

"We've got to give customers more choice," Chris Leslie told the BBC.

But banking analyst Ralph Silva said: "What makes anybody believe that there's a queue of people willing to buy these branches? New and smaller banks - they don't want more branches, they want more apps. There's no market for branches out there."

He argued competition would only increase if new players, such as supermarkets, and car companies, entered the market.

The BBC's Newsnight reported that Mr Miliband may suggest a cap on the size of banks, possibly based on their share of the UK market.

However, business sources told the programme that such an intervention was another example of an anti-business sentiment in the Labour Party.

Just so we are clear though who has the worst record on this issue, here is a graph showing how bonuses were much higher under the previous Labour Government than now: 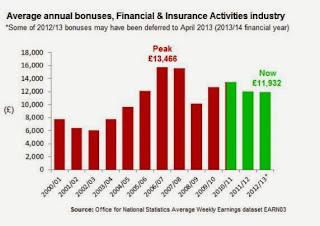 It is still a problem but not as bad as it was.

Comments:
As I written elsewhere, bonuses can and should be regulated by the taxation system,i.e.HMRC.
First two definitions; a bonus is paid as a part of an employee's income that is transferred from the business's profits; wages/salaries are paid out of a business's turnover; a cost to the business.
The taxation rules could be; a bonus paid out of profits is taxed at 10%. Bonuses paid out of turnover would be taxed at 100%.
This would penalise directors who run a business into bankruptcy and still award themselves bonuses and reward employees who contribute to a business's success.

A piecemeal approach will not work.
As I have written elsewhere, the whole economic system needs to be replaced. The banking system, company law, types of legal firms, contract law, the taxation system, the benefit system etc. etc.
At present these systems are fragmented, dysfunctional and disintegrated. Thy do not work and are "not fit or purpose".
A complete integrated economic system needs to be implemented to resolve these problems.