The Independent reports on one of the many pitfalls of social media this morning, identifying the real people from the spoof accounts.

Apparently, the Prime Minister himself feel into this trap when tweeting about the government's benefits cap earlier today:

The Prime Minister's account, which is followed by 366,000 people, published a tweet saying: "We're rolling out a cap on Benefits today - @IDS_MP and I are determined to make work pay, and help the UK compete on the #GlobalRace."

Unfortunately for the PM the @IDS_MP account is not connected with the Work and Pensions Secretary and indeed spends most of its time mocking the minister.

Sample tweets from the account include: "I've always supported a Mansion Tax. Your Tax buys my Mansion. Chin chin!", and "A thrifty way to keep cool in this heat wave is to dab the ice from your Champagne bucket onto your forehead."

At the beginning of this month the mystery user behind the account wrote: "A 15% increase in MPs pay is a disgrace. Has anyone seen the price of Foie gras and Armand de Brignac...we need at least 25%"

Surprisingly perhaps, the mistaken tweet, which has been since been retweeted 409 times and favourited 134, remains on the Prime Ministers feed.

In an apparent response to the PM's tweet @IDS_MP replied: "Chin chin Dave. Round mine for a Pimms later?" 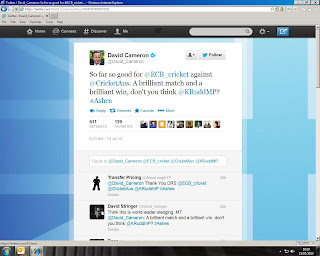 I appreciate the sentiment but how does it add to international relations?