Carwyn comes over all West Wing 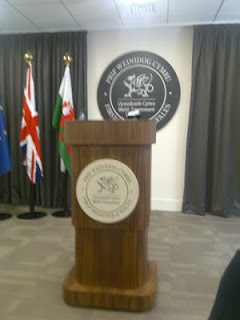 It seems that the First Minister unveiled a new media briefing room in Cathays Park yesterday. Modelled on the West Wing press room, the new set-up has cost the taxpayer £22,000, including a new £1,800 lectern and an imposing £4,500 slate seal, engraved with the words 'First Minister of Wales'.

He wrote on Twitter: "Does no one in WAG wonder how the Cathays Oval Office will look to North Walians?:

"A regrettable display of extravagance on the day that Glan Clwyd, Ruthin and Colwyn Bay hospitals are being hit so badly."

The First Minister defended the costs of the room. He told journalists: "There were discussions in terms of needing to separate the legislative from the executive. This is a government briefing room.

"It's a general purpose room, that is not just for briefings. It will be used to host events as well and not just for press conferences. And it's important to have somewhere that looks the part, whilst bearing in mind the cost."

He insisted the room was value for money, saying the cheapest and most locally sourced materials had been used - such as Welsh slate on a First Minister's seal.

"I know that people will saying this is expensive and I accept all of that. But this room will be hear for many many years."

It puts the £72 cost of Ministerial ring binders into persepective..

Comments:
It's the most impressive thing he's achieved so far!

Welsh Wing surely?
Perhaps Charlie rather than Martin would be the more appropriate Sheen
to play him though...