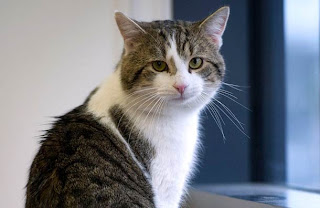 The Daily Mirror has never struck me as being written by a group of cat-lovers. Their concern yesterday for the day-to-day comforts of Larry, the Downing Street cat, is not therefore convincing. This is especially so as they appear to have resorted to the old journalistic method of delivering a story despite the facts.

They report that Larry is banned from the flat lavishly refurbished by David Cameron at No. 10 Downing Street:

The Prime Minister publicly welcomed the tabby to No 10 earlier this year but he is not allowed in the family’s living quarters, even though they are plagued by mice.

The ban came to light after details were released of their £64,000 refit, which

Labour MP Kerry McCarthy said: “Poor Larry is being treated like some servant from Downton Abbey. It is shocking that after all the publicity he is not even allowed to set paw inside the Prime Minister's flat."

And we wouldn't want to deny Larry the chance to mingle with journalists outside No. 10 would we?

Comments:
"He wouldn’t be able to get at the rats."

Which rats would that be, Peter?

Larry hasn't been effective so far, the place has been rat-infested for decades, both pink and blue ones.. with an occasional brief visit by the odd yellow one to see his not so best mate.

A belated Happy Christmas to you!

Well, the place will never be infested with Plaid Rats now would it!

They aren't due out until late April anyway....

The Senedd has spent £23,000 on soft furnishing and carpets (including a leather trimmed £6,000 table) on the accommodation of the presiding officer since last May. I'd donate my big fat cat Rosie to do the necessary damage to the re-fit but the Labour Party has already provided one.

Larry's got it sorted then, no pressures