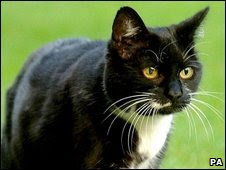 The sudden appearance of a number of rats on the steps of 10 Downing Street during live television broadcasts has led the authorities to seek a replacement for previous feline occupants of the famous street, Humphrey and Sybil.

The Daily Telegraph says that David Cameron's aides have confirmed they will look for a new cat:

A No, 10 official said: “We have not yet been to Battersea cats and dogs home – not yet.”

Cats have not had a happy time in Downing Street in recent years. Humphrey wandered into the building as a stray but was moved out at the instigation of Cherie Blair and later died in March 2006 at the home of a civil servant who cared for him during his "retirement".

Sybil (pictured), who belonged to Alistair Darling’s wife Maggie, was brought down from the then-Chancellor’s Edinburgh home to Downing Street in a bid to rid the house of mice. But she did not settle and returned home.

The change of mind by Downing Street officials has come about after excessive media interest but that in turn was driven by interest on blogs and twitter, who first spotted and highlighted the errant rodent. If only it were that easy to change government policy.

Comments:
In 1964 the Downing St cat was called Peter. He went missing for a few days and after a few weeks gave birth to kittens. He was re-Christened "Peta" this made the national press. Then again in '97 the suspicion was that cherie Blair had the resident cat "done in" This too made the press - and now we have "Larry" at No 10 - nothing much changes.