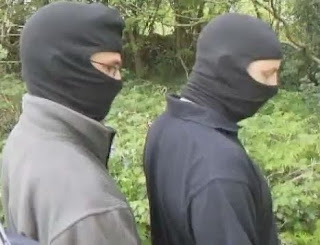 I have been e-mailed a copy of a letter sent by a North Pembrokeshire resident to one of his local AMs together with some photographs of the masked men who came to carry out surveys yesterday. He writes:

Yesterday, Welsh Assembly representatives attended land near Newport to survey for badger setts as part of the cull process. I happened to be present as the occupier of the land in question grows crops for me under contract.

Representatives from the WA were Mr X and two other men dressed all in black with balaclavas entirely covering their faces except for their eyes.

These masked men offered photo-id cards that bore no name, but refused to take off their face coverings to check against the id photo.

While a person returned to the farmhouse to call the WA to ask how they could possibly check a photo id in this case, the WA representatives attempted to force their way through a gate onto the land.

Two of the occupiers said they would not allow them access until the reply was received from the WA - on grounds that the men in black balaclavas were not identifiable.

At this point these two occupiers were arrested for obstruction. It should be noted that they were released without any charge whatsoever, showing that they were in fact being reasonable in their actions.

The point of my letter is that in a subsequent interview, Mr X, filmed by national media, confirmed that when the contractors returned to shoot the badgers, they would still be masked.

When pressed on this point, he confirmed - on film - that this meant the WA would be sending masked men with guns onto the land at night.

This is incredible. The legal, human rights, public security and safety issues are immense. I cannot believe this can possibly have been the intent of the WA in passing this legislation.

I am asking you if you support the deployment of masked armed contractors, and if not, will you please bring pressure to bear on the WA to find an alternative solution.

Another campaigner has provided some damning evidence that illustrates why this cull is unnecessary:

Since the 30th of April 2009 the number of herds under TB restriction in Wales has fallen dramatically.

A fall of 886 in the number of herds under TB restriction (a fall of 43.7%) over 10 months, cannot be continually described by the Welsh Assembly government as being a disease that is ‘out of control and unsustainable.’

When March, and April figures (2010) are factored in, it is likely they will show that during the last 12 months, the number of Herds under TB restriction in Wales will have fallen by 50%. This has been achieved without a badger cull and only limited cattle measures i.e. more testing and slaughter of infected cattle.

There are still a total of 702 TB tests overdue which is really quite inexcusable when the WAG proclaims to be doing all it can to deal with this disease.

If considerable time, manpower and expense had not been wasted in extensive preparations for a totally irrelevant badger cull this disease would be on the way to being eliminated from Wales or at least being reduced to a very low and insignificant level.

The WAG often refer to the number of farms and landowners, (more than 10%) who are refusing to co-operate with the badger cull as being small, a handful, trivial or insignificant! Whereas I seem to remember the WAG arguing that 6-9% was a figure that was ‘substantial’.

Are the Government's TB control measures starting to come apart at the seams?

Comments:
By wearing balaclava's and being dressed in a black uniform whilst undertaking a Political Activity (representatives of WAG, a psudo political organisation) I would suggest that they are breaking the law.

An Act to prohibit the wearing of uniforms in connection with political objects and the maintenance by private persons of associations of military or similar character; and to make further provision for the preservation of public order on the occasion of public processions and meetings and in public places.

1 Prohibition of uniforms in connection with political objects

1)Subject as hereinafter provided, any person who in any public place or at any public meeting wears uniform signifying his association with any political organisation or with the promotion of any political object shall be guilty of an offence:

If they were muslims they would not have to take of their head gear, these men need to hide their identities to the public because of the anti protesters are crazy enough to hunt them down and vandalise their homes and vehicles, as long as the land owner has seen who they are that should be final. these do-gooders sitting in their armchairs do not see the strain farmers have each month just hoping they get a clear tb test, and if they have had a positive test before they need 2 clear months testing before "any" of their cattle can goto market, as for the number of tb cases going down on the defra scale, this is because of the controlled culling, so all you do-gooders which have slowly recked this once great nation get off you backsides spouting rules and regulation acts and come down the farms each month to see what our friendly badgers are doing to us !!!

I agree with that -- it does seem that these mysterious persons(probably working for Thomson Ecology) were indeed wearing "uniforms" as we would understand that word -- with a view to disguising their identities and to intimidating the public. The incredible thing is that the police connived in this and escorted these men onto private land against the wishes of the owners.

More seriously, the police allowed these men to use photo ID cards which had no names or affiliations on them -- and in circumstances where the men refused to take off their balaclavas so that landowners could verify that the photos matched the faces of the men concerned. is this not also a breach of the law?

Just to clarify -- I do NOT agree with Foxhunter. I didn't see his post before posting my own. He's welcome to his views, but it's a bit rich for him to accuse peaceful protestors of hunting down innocent Welsh Assembly surveyors. We all know about the strain farmers are under because of TB -- and many of the protestors are from farming families themselves. But if Foxhunter thinks that badgers are to blame for the incidence of TB in cattle herds, and if he thinks that TB will be reduced by shooting thousands of badgers in the cull area, he will be proved wrong. All the science shows that the issue is MUCH more complicated than that.

I see that foxhunter says that these men needed to hide their identities because of anti-cull protesters. But they weren't dealing with anti-cull protesters - they were dealing with the farmers and landowners who are supposed to be the people who benefit from the cull (assuming that it actually works, which I don't believe for a minute). So if they won't take their masks off for people who they are supposed to be on the same side as, there is something very wrong going on.

For Elin Jones to release a press statement regretting the actions of a 'tiny minority' of people carrying out'illegal activity' is a slanderous deceipt. She and her government are abusing the powers they have made up. Why should we say yes to giving them any more? This woman is a disaster for democracy and could set back decentralised rule in Wales by decades. We don't want a totalitarian state. Take this woman off the case while there is still time.