Liberal Democrat-led Council is praised for being Liberal 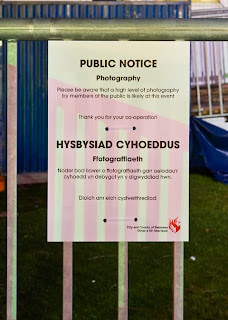 Liberal Democrat-led Swansea Council has been praised by Amateur Photographer magazine for bucking the trend amongst Councils who try to restrict photographs in public places.

The magazine reports: Amid continued controversy surrounding the attitude of many officials towards photographers, an amateur has praised the approach of his local council as a 'breath of fresh air'.

Swansea Council posted a sign outside its 'Winter Wonderland' warning people that the event was likely to attract photographers. It stated: 'Please be aware that a high level of photography by members of the public is likely at this event. Thank you for your co-operation.'

Dominic Burscough, who took a snapshot of the sign, welcomed the 'enlightened attitude' of council officials.

In an email to Amateur Photographer magazine Burscough wrote: 'Although plenty of other people were taking photos, usually with mobile phones, I was the only one using a digital SLR with a tripod. And I didn't have any problems or strange looks from the public except, ironically, from kids who were intent on getting into the shot and making silly faces.'

He added: 'All in all I had a fairly successful shoot, despite having been a little nervous of the crowds' reaction - and any overzealous officials - in light of so many reports of incidents between photographers and the authorities in similar circumstances… A breath of fresh air…'

Last November Swansea Council revised its rules on taking pictures in public after photographers complained that its Data Protection guidelines were unfair.

The council had called on local amateur and professional photographers to help it draw up new guidelines on photography after the council's initial draft failed to make clear that images taken for personal use do not risk breaching the Data Protection Act.

The photo is by Dominic Burscough

Comments:
What a world we live in what a world it has become you cannot take a photo or you need to warn the public, what next you have a sun tan you cannot come in here you might be a bomber.

I take it that this location hasn't been designated a Section 44 area?