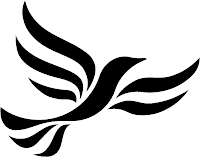 Darrell Goodliffe and Jane Watkinson have cross-posted a piece on political symbols and colours, starting with the Liberal Democrats. They remind those of us who are political anorak-enough to notice these things that that the Conservatives once used red and that the old Liberal Party favoured blue. Indeed as late as the 1970s the Liberals in Ceredigion were I believe campaigning using the colour blue.

They say that the main determinant of early political colours appears to be closeness to local landed interests or a desire to affiliate with local communities (hence Labour’s early dalliance with Catholic green). However, what caught my eye was the information that the Liberal Democrat bird, affectionately known as Libby owes its name to an acronym. That was something I did not know.

When Paddy Ashdown first launched it at a rally in London that I attended it was being sold to us as the bird of freedom. In fact I still have the design guide that was produced explaining how to use the symbol, what typefaces to use and explaining the pantone for the gold colour, all of which has evolved since then into something slightly different. However Darrell and Jane relate that Libby actually stands for “Life Is Better Because Of You”. Is that really true?

Comments:
God, I hope not. How nauseatingly twee.

This ties in nicely with your following post; up to relatively recently there was, and for all I know still might be, an outfit that contested council elections in such places as Sunderland and South Shields and whose colours were green. They called themselves the "Progressives" and were Conservatives in all but name...

As to acronyms, you probably remember ANFLFANFL for Libby Mk 2!

Looking at the blogs of plaid cymru,
i reckon they should be 'Gray'- dull and not knowing where they stand