Gordon Brown and an unfortunate backdrop 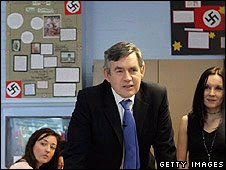 With Labour spokespeople touring the Country warning about the danger of the BNP you would have thought that the Prime Minister would be more careful as to the backdrop of any photos he poses for.

This photo is taken from the BBC website and shows Gordon Brown talking to pupils at Prendergast Hilly Fields College in South London. It is possible to clearly see three swastikas on the wall behind the Prime Minister, presumably from some school project.

Thanks to Charlotte Gore for spotting it. I think that the PM needs to replace his media handler as soon as possible. Tony Blair's minders would never have allowed him to pose for this photo.

Comments:
Nazi signs and a blue tie, not good.But a sign to come perhaps.

I was at the school today
I think the back drop thing is making something out of nothing..

When Gordon Brown was in Swansea for the recent (poorly attended) Wales Labour Party Annual Conference, he posed for the Press photographers before a Welsh Language slogan that had the wrong spelling for the Welsh word for "winning". It sems the writing is on the wall for Gordon AND his Labour Party. Good riddance!

Yes your right good riddence, but it's also a pity that the Lib Dem's are not shouting from the roof tops we are a party that could take over.