The things that they say 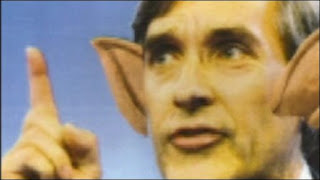 Labour's new website has attracted a lot of comment on the media and the blogosphere but the most memorable remarks have to be those of its supporters.

The site itself carries two endorsements from Wales' most senior politicians. Despite refusing to answer questions on the website on Radio Wales this morning, First Minister, Rhodri Morgan tells its readers that: "This brand new political website is definitely one to watch!" Clearly, he does not spend much time on the internet.

My favourite was Peter Hain, who went on Dragon's Eye last night to argue that this is a principled left wing website. Er..no, it is an attack blog and a pretty poor one at that. He went onto argue that Plaid and the Tories will be afraid of this site and that it is Labour's Obama moment , however as Freedom Central points out it is more like a "Howard Dean moment".

Betsan Powys quotes Labour Assembly Member, Alun Davies who believes that this site is "an opportunity to create a positive and constructive debate about the future of Wales". We await the constructive and positive stuff.

At the moment aneuringlyndwr.com is the internet equivalent of watching your dad dance at a disco.

Comments:
I don't often give you credit Mr Black but that dad at a disco comment is spot on!

aye. If I was a Labour supporter I would be desperately trying to distance myself from it. Infact, I asked a militant socialist-type Labour guy about it earlier, and his response was "oh dear..."

I'm not going to comment on the content, as I can't be bothered to read it. But from a design/web2.0 point of view, my seven year-old has made better sites. And she knows who Glyndŵr was too.. (using Bevan's name is fair enough, but to hijack a nationalist figurehead is taking the p*ss)

Labour should be concentrating on fixing their mess, not making rubbish primary-school Youtube videos and attacking the other parties.

The only real offensive and dishonest part of it that I have seen in this new childish Labour Web Site is the hypocrisy Labour has to latch onto the name "Glyndwr". They have been mostly treacherous opportunists in Wales towards the Welsh people. How can they now claim to stand in the place of Owain Glyndwr? Coming to think of it, as I type this - maybe I'm over reacting to what is a schoolboyish bit of nonsenses endorsed by Peter Hain; Rhodri Morgan; Eluned Morgan and the old guard hierarchy. Says a lot about their lack of common sense. Yes, on further thought we should just laugh at its patheticism and ignore it and them. They are desperate as a dying party with its traditional membership dwindling with every day that dawns. First there was just Labour then Old Labour then New Labour and now "Was Labour" - past tense!

A little background digging brings up the true author of the site.

Makes we want to start blogging again. It's labour twats which made my mind up to close down the site with their negative comments and abuse.

So much for free speech.

"an opportunity to create a positive and constructive debate about the future of Wales"
When Plaid Cymru launched their WalesCan website the labour party were up in arms stating that Plaid have got their priorities wrong. Are they not just gutted that Plaid has done it before them and that Plaid has a much, much, much better website?

Additionally, why aren't we able to comment on their blogs? Scared of what people may say?

I can't stress enough that their website really is poor.