An alternative view of the Olympics 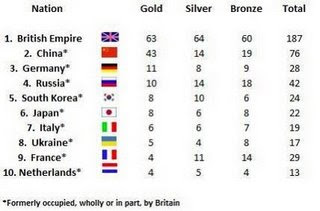 Comments:
I'm a bit lost as to what this table is getting at? Are we supposed to long for the good old days of colonialism? Or is it that we can artificially inflate ourselves to top of the table by taking some unreasonable considerations into account, such as territories that we previously occupied? Or maybe the political right is seeking to ensure that Britain takes some undeserved credit for the performances for other countries?

Seems silly at any rate.

(Btw Peter, any chance you could enable the comments on your blog to be viewed in the more standard blogspot format? It's easier on the eyes for me at least. An example can be found at Iain Dale's blogger comments page: https://www.blogger.com/comment.g?blogID=6214838&postID=2376982864475302132 )

It is a bit of fun, not to be taken seriously.

Not sure what you are getting at regarding the comments page. This page is identical to the one you provide a link for. Perhaps you can e-mail me.

surely the footnote should read 'formerly occupied illegally, in whole or in part, by the British Empire' ?

suspect otherwise this probably appeals to Daily Mail mentalities only!

be nice if you published a table showing wales with 3 medals - at least then our athletes would have a flag on which their country is represented!

If we're talking Empires, surely Spain should be at least as high as France.

The yanks wont like that! nor will the aussies! Britain still rules the waves

I much prefer this one, linked by Alasdair W, which shows the medals table with adjustments according to medals-per-head-of-population, or human rights record, or GDP.

Oh, and note the hat-tip. I was plagiarising Donal Blaney and said so.