Banquo at the feast 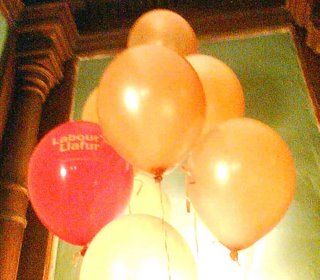 So what exactly was this Labour balloon doing at the wedding party of Welsh Liberal Democrat Assembly Leader, Mike German?

Apparently, it was a joke by the balloon supplier. When Mike and Veronica went to put their order in he told them that he had traditionally always supplied the balloons for Labour's Blaenau Gwent campaigns. However, this year Labour went to a different supplier, who was able to quote a lower price, and then they lost the by-elections.

The balloon vendor obviously has a good appreciation of irony as well a strong sense of poetic justice.