The correct use of props 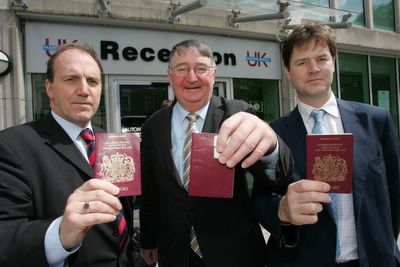 During the 1997 General Election I was based in the Welsh Liberal Democrat Office in Cardiff helping to co-ordinate our campaign across the Principality.

Mainly, we spent the time thinking up ways of getting our message across in the media. This led to a number of stunts such as the Quangobusters and Plaidwayman.

We also sought ways of livening up our daily press conferences by introducing props to illustrate our message. This could be as sophisticated as a giant mocked-up railway ticket or as simple as a piece of wood with a nail through it.

One thing quickly became evident, a lot of our star turns at these press conferences had problems holding the props correctly whilst speaking at the same time. After a while we started a league table of those politicians who were the best co-ordinated.

I was reminded of this earlier in the week when a press release came through from Westminster advocating that people should renew their passport early so as to avoid being lumbered with an ID card.

The Press Release was accompanied by the photograph above in which Simon Hughes, Brecon and Radnorshire MP Roger Williams and Nick Clegg are pictured holding up their passports. If you look carefully however you will see that Roger Williams is out of synch with the other two. He is holding up his passport back to front.

Perhaps we should reintroduce those lessons on hand-eye co-ordination we discussed back in 1997.