A man of substance? 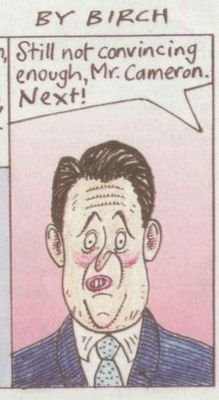 Andrew Rawnsley in the Observer also expresses reservations about David Cameron's ability to reform the Tories:

David Cameron is a pilot who can't get his undercarriage up. His leadership of the Tory party left the runway with impressive speed, considerable élan and a strong following wind from a friendly media. But now he is struggling to gain any altitude. I sniff the sweet smell of panic in the Tory leader's cockpit about what he and his modernisers can do before the right wingers in their party try to storm the pilot's cabin.

You can see why they are getting a little frantic. David Cameron had a dream start, the most sun-blessed honeymoon a new Tory leader could ask for. To him was gifted a divided Labour party, an embarrassed Liberal Democrat party, a Conservative party willing him to be a success and a benign press drooling over his every photo-opportunity; his wife even provided a new baby to kiss.

The problem appears to be that David Cameron is out of step with his Party:

The electorate's negative feelings towards the Conservative party are too deeply embedded to be simply magicked away by David Cameron sporting his Converse trainers and saying he will stick a wind turbine on the roof of his new house. A revealing poll by ICM for Channel 4 News had well over half of the respondents agreeing with the proposition that Mr Cameron was a new face, but his party hadn't really changed at all.

This presents him with a big problem and a form of consolation. At least it provides him with a temporary alibi which he and his allies have eagerly seized on to try to head off attacks on his approach from the rumbling right. Nice leader, shame about our party. That has been the thrust of the message, albeit delivered in code, to the Tory spring conference in Manchester this weekend. The chairman told them that there was nothing wrong with David Cameron in the eyes of the electorate. 'People really do think he is the goods,' said Mr Maude, using the ad-speak for which the Tory modernisers have a profound weakness. 'We now need to convince them that the whole party has changed.'

Mr Cameron was right to move quickly to change his party, but the very rapidity of what he has done is bound to breed questions in the mind of the sceptical public about the sincerity and depth of his modernisation of the Conservatives.

When Tony Blair took over the Labour party, it had been set on a modernising trajectory for some years. He could locate his leadership in a narrative of change that had begun 11 years earlier with Neil Kinnock. What Labour took more than a decade to manage, David Cameron is trying to achieve in a much shorter time. The voters are understandably suspicious when a party tries to present itself as an overnight convert.

Could it be though that David Cameron is not the messiah he is being made out to be? People I have spoken to, who have no record of political involvement other than their dedication to voting, think that he is a carbon-copy of Tony Blair. Most of them do not trust or like Blair anymore, but will stick with him rather than take a risk on a political look-a-like who they do not know and who has no track-record.

Cameron's weakness is not his flip-flopping, it is that people do not trust him precisely because he has set out to mould himself and his party into something that neither are. In these circumstances, a principled and well-led Liberal Democrat party has everything to play for.