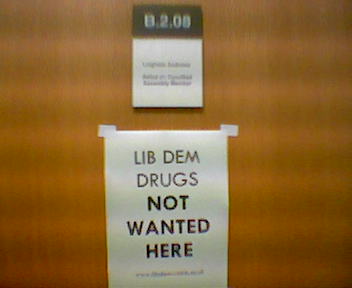 So just how worried are Labour by the Liberal Democrats threat? Well judging by this picture of Labour AM Leighton Andrews' office door down in the Bay, they are very worried indeed. So much so, in fact, that they are happy to resort to accusing us of being drug dealers on the basis of their distorted and entirely opportunistic critique of the modest and well-argued anti-drugs policy adopted by Liberal Democrats Conference a few years ago. A policy, by the way that the Home Secretary now appears to be in tune with. He has recently been quoted as saying that we should find alternatives to prison for drug addicts.

This is precisely the level of debate that Labour has resorted to in by-elections and elsewhere. It owes more to the politics of the gutter than to rational discussion. God only knows what people like Leighton Andrews think of intelligent Labour Parliamentarians such as Paul Flynn, who have consistently argued for a far more liberal position than anything we have advocated as a Party. Thanks to Paul's 1999 book "Dragons led by Poodles" we do however know what he thinks of Leighton. He writes that the now-Rhondda AM is an "Oleaginous, accommodating, feline, apprentice shift-shaper." I don't think there is room for all that on my office door.

Comments:
Peter dont be in such a rush to condemn....if the Lib dems have to pay back the £2.5 million donation they received from a swiss holding company owned by a guy who niether lives or votes in the UK....you may need to adopt a more creative approach to fundraising....

I seem to remember similar antics done to other parties by the Liberal Democrats. When I knew Leighton a long time ago he was the perfect model of a Libertarian Socilist and would have aggreed with the policy of the Lib Dems but now like the Liberal Democrats he has selective amnesia

They did it at Hartlepool too during the by-election - the Government running a programme pretty much in line with Lib Dem policy for getting hard drug users into treatment rather than prison - and then attacking the Lib Dem policy! Bizarre.

A couple of points:

Firstly , a surprising number of apparently staid Conservative Councillors in my neck of the woods (Essex) are in favour of legalising cannabis.

Secondly, when exactly was Leighton Andrews at Sussex University? The Libertarian Socialists were quite a force at Sussex in my day . (I was a member of the Union of Liberal Students, and the Workers Revolutionary Party used to come to our meetings to try to convert us)

Those posters were on the office doors of lots of Labour and Conservative AM's.

Why are you always picking on Leighton? Are you thinking of standing in the Rhondda at the next election?