Is Brexit to blame for rising energy bills? 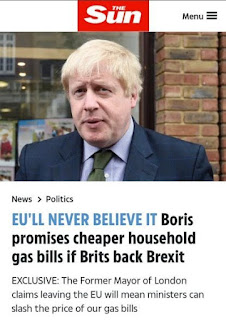 The headline from the Sun above appears to represent another broken promise by Boris Johnson. There are many explanations why energy bills are rising but the role of Brexit in that phenomena has not had a big enough profile. According to the Byline Times, this needs to be corrected:

As Mark Haller writes for West England Bylines, the UK has elected to remain outside the EU Internal Energy Market, even though a considerable amount of the country’s energy needs are met by Europe. As a result, the UK has lost significant control over prices, losing the ability to participate in the energy auctions that determine the cost of fuel. Indeed, almost half of the UK’s gas supply is imported from the continent.

There are undoubtedly a range of global factors, beyond Brexit that have contributed to the rising prices, namely: high demand for liquefied natural gas from Asia, low winds causing less renewable energy to be generated, and outages at some nuclear power stations.

However, these factors do not change the basic fact that Brexit has accentuated the problem, not least by reducing the UK’s ability to respond through the EU Internal Energy Market.

The website Epexspot – which provides data on energy markets in Europe – shows that energy auction prices are considerably higher in the UK compared to the rest of the continent.

Energy prices are increasing markedly across Europe – but the problem is particularly intense in the UK.

This is frustrating, given that politicians have been warned for years of energy prices rising after Brexit, in the event that close harmony wasn’t maintained with the continent.

In March, the House of Lords EU Environment Sub-Committee published a new report, warning that energy prices would rise due to the inefficiency of current cross-border electricity trading arrangements between the UK and Europe.

It states: “As an EU member state, the UK played a leading role in developing EU energy policies. These in turn shaped how the UK could pursue secure, affordable, and clean energy supplies. The UK was part of the [Internal Energy Market’s] price coupling arrangements for cross-border electricity trading as an EU member state, but left the arrangements at the end of the transition period. Great Britain is currently trading electricity with continental Europe and with the [single market] through less efficient arrangements.”

The Lords report echoes evidence produced by peers three years ago, in 2018, advising that the UK faced the prospect of energy shortages and increased energy bills, if the Brexit transition was not managed effectively.

This preceded further warnings from UK Power – an energy switching service – prior to the implementation of the UK-EU post-Brexit trade agreement in December 2020. The site cautioned that the EU could now restrict its exports to the UK in the event of cold temperatures and increased domestic demand – which “in turn could lead to shortages across the UK, alongside higher energy bills for households and businesses”.

The comments made by Johnson and Gove to the Sun in 2016 also claimed that taxes would be higher if the UK remained in the EU. In reality, ordinary people are being hit financially after its departure from the bloc.