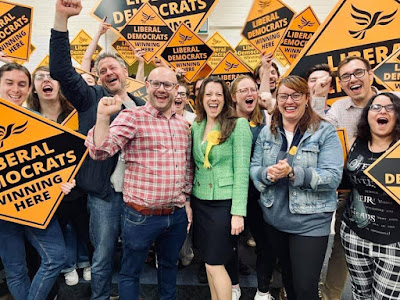 Awaking this morning to the sensational result in Chesham and Amersham, where my good friend Sarah Green took a safe Tory seat on behalf of the Liberal Democrats with an 8,000 majority, one cannot help but feel that our party's fortunes are about to take a turn for the better,
When I returned from helping in the constituency at the end of May, I wrote about the by-election: 'This is an opportunity for the party to re-establish itself after a very difficult decade where we have suffered the consequences of a very difficult coalition government'. Yesterday we took that opportunity with both hands.
Whether this transpires or not has yet to be seen, as do all the predictions of more gains from the Tories on the basis of the swing in this by-election. By-election gains are often difficult to hold onto and swings like these do not always prevail for long, though I am confident Sarah will hold this seat when a General Election is called, but the rest is academic unfortunately.
However, this by-election win has changed the political landscape in one important way; Boris Johnson's 80 seat majority is no longer as secure as he would hope. That is because, all the Tory MPs in those so-called safe blue wall seats are now looking over their shoulder, and may not be so easily persuaded to trot through the lobbies in support of controversial legislation like that on planning laws.
The Liberal Democrats did not demolish the blue wall yesterday, but they have chipped away at its foundations, and that could be enough to have severely weakened Boris Johnson and his government.
# posted by Peter Black : 12:54 PM