The Downing Street flat and the alleged Tory donor 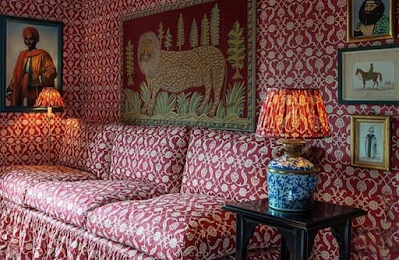 |
This is not the Downing Street flat refurbishment that has allegedly cost £88,000 but it is an example of work by the same designer and there is a good chance that it is a fair approximation of the final design. It is hideous, a good argument to restore the John Lewis furniture that Boris Johnson and his fiance ditched.

But of course what the flat looks like is not the issue, it is how it was paid for and whether any rules have been broken in its commissioning. It seems likely that they were, or at least that the relevant declarations were not made in good time. What is more the Bywire website believe that they have another angle on the whole affair.

They say that the Conservative Party donor who paid £58,000 so Boris Johnson could refurbish his Downing Street flat is the founder of a company who may have benefitted from lucrative public contracts worth up to a staggering £120 million:

Leaked emails from October 2020, which were initially revealed by the Daily Mail last week, showed that the multimillionaire Peer, Lord Brownlow, was the person who had handed almost £60k to the Tory Party in order for the Prime Minister to renovate his Downing Street flat.

However, in addition to being a member of the House of Lords, Brownlow is also a business magnate who is listed at a total of 36 companies on the official Companies House website.

One of these companies is Huntswood CTC - a company who, according to both Companies House and the Huntswood corporate website - Brownlow is the founder.

According to the government’s official public contract finder website, on May the 3rd, 2017 Huntswood CTC were awarded a public contract alongside 36 other firms as part of a framework agreement worth between £60-£120m in total.

The public framework contract was to provide the Financial Conduct Authority with Skilled Person Reports, and it is unclear how much public money Huntswood CTC may have benefitted from out the agreement

In addition to their framework contract, Huntswood CTC were also handed a direct public contract worth up to £60,000 to supply “accounting, auditing and fiscal services” to the Student Loans Company on February the 16th 2018.

Brownlow has repeatedly donated huge sums of money to the Conservative Party and their MPs - to the tune of almost £3m - with his first donation to the party in April 2005.

In 2019, The Huntswood founder was made a Peer by the outgoing Prime Minister Theresa May. Brownlow has donated over £100,000 to May’s Maidenhead Conservative Association.

We all await the outcome of the Electoral Commission inquiry with interest.

Comments:
Yes. Byline Times has an article on this published yesterday. Just read it on twitter