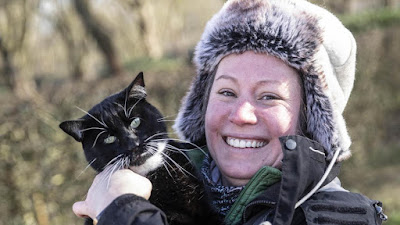 With the government intent on saving as many statues as possible, irrespective of their history and context, and with Ministers seeking to use whatever means they can, Mussolini-like, to embed their own distorted view of history into the national consciencious, it takes a cat to come to the rescue of those monuments that are worth saving.

The Times reports that Lord Roscoe has become the National Trust’s first guard cat, tasked with the job of protecting statues of Roman gods in the grounds of a 17th-century stately home from being defaced by a scurry of squirrels.

The paper says that staff at Ham House, near Richmond, in southwest London, took in Lord Roscoe, 6, from the Ginger Cat House Rescue centre last spring after the toes of Fortuna, the Roman goddess of fortune, and Mercury, the god of merchants, began to be nibbled away by grey squirrels. Apparently, these pests gnaw at the lead feet of the statues to file down their teeth, removing important detail.
Go Roscoe.
# posted by Peter Black : 11:41 AM