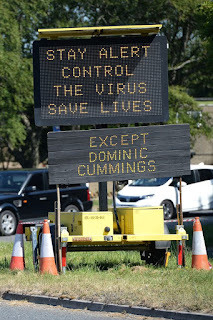 This is a real road sign, or rather it is a Highways England sign that has been added to by a person or persons who is as annoyed as the rest of us at the way the man who helped formulate lockdown rules was able to blatantly disregard them without suffering any consequences.

Mr Jamieson told BBC Radio 4's The World At One programme that people are telling officers that "if it is okay for Cummings, it is okay for us" and "it looks like there is one rule for us and another rule for the people in No 10 Downing Street".

He said: "Now you can't... if the rules are flexible, and people seem to have interpreted them who are at the heart of Government, then it is almost impossible then for police officers to be able to carry out their job effectively.

He added: "What the police are now saying to me is they are getting quite a push back, not just from some of the younger people who previously where saying why can't I play football, why can't I go out in the streets? They're getting push backs from other generations of people as well.

"Now that is a bad sign, showing that confidence in the rules, confidence in Government and thereby the police's ability to enforce it has been undermined very much in the last few days."

This more than anything else underlines how trust has broken down in the government and its lockdown rules. If more deaths arise from this disregard for the rules then it will be on Cummings and Johnson, and their irresponsible behaviour.