Labour's flirtation with Brexit continued yesterday when Jeremy Corbyn promised a further referendum on Brexit with a "credible Leave option" versus Remain if his party wins the next general election, undoing all the good work he has done over the past week in working with other party leaders to foil Boris Johnson's no-deal agenda.

Essentially Labour's position now appears to amount to a manifesto commitment to negotiate a better deal to leave the EU, if that is possible (and we know how that turned out for Theresa May), and then take that deal to the country.

However, the party will not say whether it will support Leave or Remain in that plebiscite opening the door to massive public disagreements at the top of the party during the forthcoming General Election campaign and possibly alienating both sides of the argument.

The Labour leader has rejected calls from senior figures in the party and grassroots activists to campaign explicitly to Remain during the election, despite fears votes and seats will be lost to the Lib Dems.

It is a fence-sitting exercise that will prove once more that Labour cannot be trusted on Brexit. It is little wonder that a sitting Minister in the Welsh Government, not known for his disloyalty, has hit out in frustration on Twitter: 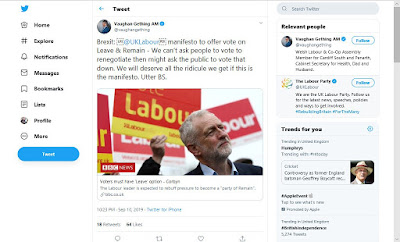 As Vaughan Gething says, putting in the manifesto that Labour will ask people to vote to renegotiate, then asking that same electorate to vote down the outcome of those talks, will lead to the Labour Party being ridiculed. It is little wonder that he has labelled it 'utter BS'.