As a party UKIP reached their existential crisis some time ago and continued to fall apart. However, there remains a small bridgehead in Wales, where their group of five AMs plus one currently sitting as an Independent must wait until 2021 for a reckoning.

In the meantime they continue to exist in their own personal Idaho, rowing with each other, stomping out of the group in a huff and seeking to play out their petty divisions in personal attacks on each other.

And so it came to pass this week that the formerly disgraced Tory MP, resurrected as a UKIP AM, Neil Hamilton, who himself emerged as Welsh Leader in a coup, has been replaced by one of his colleagues, following a stormy meeting which it is alleged could be heard reverberating around the corridors of Ty Hywel.

The new leader of the UKIP group of AMs is their semi-visible South Wales West member, Caroline Jones. She was on Radio Wales earlier explaining how she wanted to bring a new 'positive edge' to UKIP in the Assembly. So no more mentions of 'Carwyn Jones concubines' then? She also claimed that she was active around her region and that there is photographic evidence for this. So that will be this then: 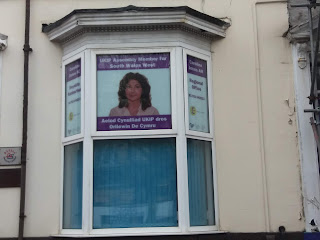 It is difficult to see what a party whose whole raison d'etre lies behind them can contribute to Welsh politics, even under a new leadership. UKIP's willingness to resort to racist propaganda, their own troubling relationship with many of their members including full time MEPs, some of whom in the past have ended up in court. and their faction-riven nature must surely mark them out for extinction.

That moment cannot come too soon for the health of devolved politics.

Update: Neil Hamilton has told the BBC that he was informed by text that he had been ousted as leader. He has accused the group of ambushing him. You couldn't make this stuff up.