Bring on the fat cats 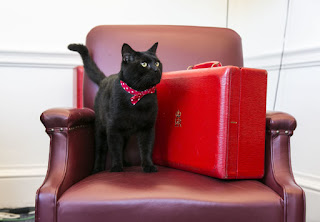 A change from Brexit, Brexit. Brexit today, to my favourite subject of cats. The Evening Standard reports that Parliament has racked up a £130,000 pest control bill in a bid to rid the Palace of Westminster of mice and moths disturbed by building work.

The paper says that payments to control the infestation soared to almost a third higher than last year’s bill, with the majority of the costs covering the employment of a full time pest controller and setting more than 1,700 traps. Some believe that the Parliamentary estate is overrun with vermin, and they don't mean the politicians.

The newspaper adds that some 411 mouse sightings were reported between January and June compared to just 313 the previous year. £8,900 was spent on catching moths and £16,000 spent on a hawk to control pigeons.

Apparently, all the maintenance work on the estate has been disturbing the pests and sending them scurrying for new refuges.

Some MPs have brought in their own cats to help deal with the problem. Many believe that the Parliamentary authorities should follow suit and introduce an army of cat mercenaries to sort out the unwanted intruders once and for all.

Larry, Palmerston and Gladstone would approve.

Comments:
Our 2 cats do not chase mice or rats or birds,just sit around lapping up bought grub and sleep, got us sussed. A bit like MPs, Lords who do no work but take the gelt.