Has Theresa May signed up to a 'coalition of chaos'? 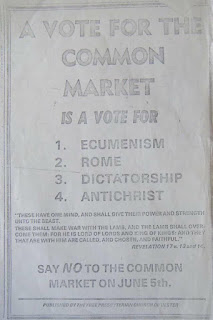 Having fought an election on the dangers to the country and the Union of Corbyn taking power with the support of a narrowly based nationalist party such as the SNP and others whom she implies are undesirables, the so-called 'coalition of chaos', Theresa May returns to Number 10 having done exactly that

The Conservatives' new partners in government will not be part of a formal coalition as far as we know, but will work on the basis of confidence and supply. That means that they will vote with Theresa May on the Queen's Speech, Budget and No Confidence motions provided that they get what they want. Everything else will be up determined on a case-by-case basis. Nothing strong or stable about that.

More to the point the DUP are not your common-or-garden political party, a Labour-SNP arrangement would be benign by comparison. As James Callaghan found out, the party of Ian Paisley will extract a high price for their support and if they don't get it then they will walk away. In allying herself with them Theresa May has put the interests of her party and herself ahead of those of the country.

If May thought she had problems with the right wing of her party before, she now has to contend with people who make her hardliners look like teddy bears. As the Independent points out, on social issues the DUP have barely ventured into the twentieth century:

The DUP doesn't mention same-sex marriage in its manifesto, but the party has repeatedly vetoed marriage equality for same-sex couples in Northern Ireland.

Its members have also made a string of homophobic comments, including branding LGBT people as “disgusting” and an “abomination”.

The party tabled a “petition of concern” following a vote to legalise same-sex marriage last May, meaning the proposal could only succeed if a sufficient number of both unionist and nationalist members of the legislative assembly (MLAs) backed it.

While 41 nationalists backed the proposal, it was approved by only four unionists, meaning it could not pass.

In 2015, the party's health minister faced criticism when he said: “The facts show that you certainly don’t bring a child up in a homosexual relationship. That child is far more likely to be abused or neglected.”

The DUP doesn't mention abortion in its manifesto, but it has been open in its support for Northern Ireland’s abortion ban, which sees women imprisoned for having one and denied access to safe and legal terminations.

Ms Foster has said the party remains opposed to any reform of the province’s notoriously strict abortion laws, urging last year that she would “not want abortion to be as freely available here as it is in England“.

Under a 1945 law, women in the region have access to terminations that provides abortion if their life is at risk or her health is at serious risk. But foetal abnormalities, rape and incest are not considered circumstances under which abortions can be legally performed.

The ban on abortion was recently ruled a breach of international human rights law by the Belfast High Court, but it remained in place because DUP and other Northern Irish parties voted against change.

In addition, on environmental matters, the party appointed a climate change denier as Northern Ireland environment minister, and a number of creationists are among its senior members. And on the national issue, the DUP states that progress should be sought to halt “hollowing out Ulster’s Britishness” and promote a “greater embracing” of it. These are not pleasant people.

Theresa May has apparently given assurances to the Tories' Scottish leader that there will be no rolling back of the many liberal measures on LGBT rights pushed through by the Liberal Democrats in the 2010 Coalition Government, nor any retrenchment on other social issues. However, we have not seen the DUP's shopping list as yet and nor has the Prime Minister. Where are her red lines?

On Europe the DUP want a soft Brexit purely out of self-interest. They cannot afford to be responsible for closing the Irish border. But we can see their attitude to Europe (and a lot more besides) from the 1975 referendum poster above (h/t to Daran Hill). That Theresa May no longer has a majority for a 'hard Brexit' has to be seen as a good thing but the DUP are unpredictable and the future remains uncertain.

The really difficult downside of this arrangement however, has to be for the future of the peace process in Northern Ireland. Stormont is currently suspended after a breakdown in relations between the DUP and Sinn Fein. If the DUP are allied to the UK Government then UK Ministers can no longer act as neutral arbiters in talks to get the devolved administration back up and running. That job may have to fall to the Irish Government, if the DUP accept them in that role.

Can the Northern Ireland peace process survive a UK Tory-DUP link-up? I hope so but I am sceptical. Like everything else we will have to wait and see.