The real wasted vote in the European elections

Thursday's Guardian contains an admission that should make all Euro-sceptics pause before casting their vote in May's European elections.

They quote the leader of the UK Independence party, Nigel Farage admitting on the eve of the European election campaign: "We're whistling in the wind if we think we can implement a Eurosceptic agenda from within the European parliament."

He adds "we cannot change a thing in Europe" and that while Eurosceptics could "have some fun" in the European parliament trying to block legislation, it will "not last very long".

As the paper says, Farage's forecast that sceptics will not be able to achieve anything in the European parliament after the elections raises questions as to the purpose of electing Ukip MEPs to the parliament, especially in view of the party's erratic voting record in the previous parliament.

So, what is the point of UKIP? Are they really asking us to vote for them so they can go to Brussels, and draw substantial salaries and expenses just so they can have fun?  I think we all know the answer to that.

N.B. The following picture illustrates UKIPs other problem, that of retaining their MEPs. They have lost 45% of them from the UKIP group in Europe since the last European election: 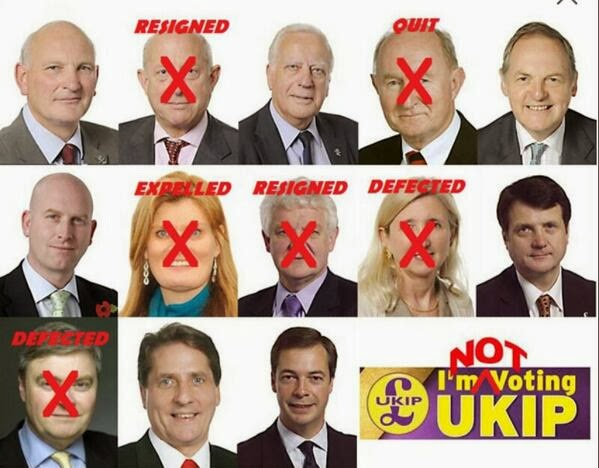 Comments:
draw substantial salaries and expenses just so they can have fun?

Not for fun: it's to build up their finances for the general election.

Hi
I see you believe the UKIP is a waste of a vote. I voted for UKIP I don't believe in their policies or in them as a party, but how else do we show the government our dislike of being part of Europe, they just don't listen and keep dangling a referendum "next time", which they won't have until they believe they will get the answer they want. Hopefully they will now get the message.

In the meantime if they want to have some fun in the European Parliament, so be it some one is going to, let it be someone who will not, play ball with their colleagues in Brussels.