On Ulysses the ginger cat and film star 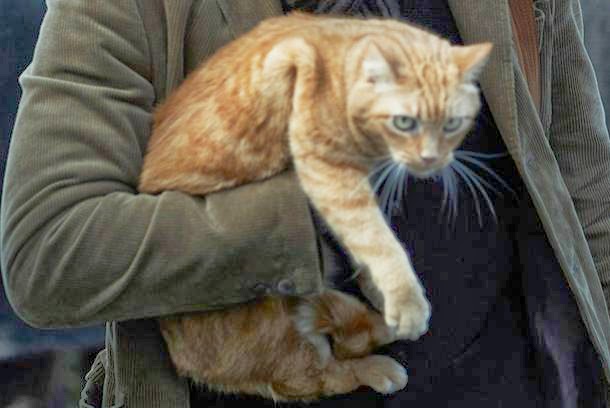 I had tickets to go and see the film Inside Llewyn Davis but unfortunately had to cry off due to attending a question and answer session with young people sponsored by Mencap. It was a worthwhile diversion and can catch the film another day, but would not want to miss this opportunity to highlight the film's real star, Ulysses, who is a ginger cat.

The trailers I have seen for this film indicate that it has an annoying thread of mispronouncing the leading character's name as 'Loowin' when any self-respecting Welsh person knows differently. But back to the cat.

One website reveals that Ulysses was in fact played by three separate cats:  As Joel Coen explained at the Cannes Film Festival last May, “The film doesn’t really have a plot. That concerned us at one point; that’s why we threw the cat in.” Maybe the Cannes jury members were cat lovers; they awarded the film the festival’s 2013 Grand Prix prize.


The person responsible for helping the Coens get shots of their talented but hapless hero dealing with a tabby prone to barrelling down fire escapes, breaking free in subway cars, running down city streets, and becoming Llewyn’s mate on a road trip (during which Roland Turner, a surly jazz musician played by John Goodman, lobs putdowns), was veteran animal trainer Dawn Barkan. You know her work: Her credits include Ace Ventura: Pet Detective, Runaway Bride, and Snow Dogs, and she’s the trainer — please don’t call her a “wrangler” (that’s for sheep and cows) — responsible for Mr. Jinx being able to use the toilet in Meet the Parents.

It would seem like the stunts for this film would be simpler than potty-training. But in an interview with Vulture, Barkan says that elements of this job, her first time working with the Coens, were among her most challenging. “Much of what was scripted is a scary thing for a cat,” she says. “[But the Coens have] worked with animals in just about every film they’ve done, so they had an idea of what it takes.”

Another website reveals that  Ulysses is now tipped to follow in the footsteps of Uggie the dog, who starred in the Oscar-winning The Artist two years ago, without realising that he is actually three cats embodied in one:

Timberlake, who plays folk singer Jim in the critically-acclaimed film, added: “He had a large rider request. Of cat food and litter.”

The star of the film, Oscar Isaac, disclosed the animal had also proved something of a diva on set, once scratching him in the face.

“That’s what happens when you tie a cat to you and run into a subway,” he added.

It sounds as if he got off lightly.