Larry is in charge

Although I follow a rather amusing spoof twitter account named after Number 10 Downing Street's cat, I had not realised how much of the establishment the Government's chief mouser had become until I saw the Inside Government website. 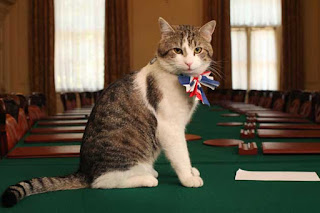 Larry's biography explains that he was recruited from Battersea Dogs and Cats Home on recommendation for his mousing skills and has made a significant impact. He is the first cat at Number 10 to be bestowed the title of Chief Mouser fficially:

He has captured the hearts of the Great British public and the press teams often camped outside the front door. In turn the nation sends him gifts and treats daily.

Larry spends his days greeting guests to the house, inspecting security defences and testing antique furniture for napping quality. His day-to-day responsibilities also include contemplating a solution to the mouse occupancy of the house. Larry says this is still ‘in tactical planning stage’.

Maybe they should put him in charge of the Government as well.

Comments:
You have given me an idea for a woodcarving of Larry, maybe chasing a mouse!