This is the seventh in a series of reviews of Welsh blog posts that have caught my eye over the last month.

I thought it was worth starting with a classic Glyn Davies post, an insiders view if you like on the potential challenge to David Cameron. Glyn is having none of it. He effectively says that Adam Afriyie may be a good man, tall, slim, handsome, well dressed, and very rich but he really needs to do a bit more in the House of Commons before he can be taken seriously.

Anyway none of this is the point. David Cameron is head and shoulders above any other UK politician in the Prime Minister stakes (though I reckon William Hague is also a class act). He is far more popular that the Conservative Party he leads. He is successfully leading a Coalition Gov't, the political equivalent of herding cats - many of which do not want to be herded. Now I do not agree with everything David Cameron does and says. I think its a mistake that he's brought forward the Gay Marriage Bill as an example. He's about as different from me as chalk is from cheese. But whenever we need a Leader to stand tall and represent the UK, he does it brilliantly.

Plaid Wrecsam have been reflecting on the Twitter ban at local Council meetings and setting out their own efforts to get it overturned. They have been understandably frustrated by the vagaries of the Council's constitution:

Since the meeting I have had time to reflect on what went on (it was quite surreal at the time) and have asked myself two questions, one, why was I not told in the nearly two weeks between submission and debate that the motion was not correct or acceptable. Secondly, how can one accept an amendment to a motion which does not comply with Standing Orders? And further how can a vote be allowed, surely what went on is wrong in law!

I don't know the answers to the questions at the moment, I will have to await my meeting with the Chief Executive.

Any article entitled 'How Peter Hain contradicts himself' is bound to attract my attention and so I was particularly intrigued by the Click on Wales article by Gareth Clubb from earlier this week in which he outlines how the Neath MP's evidence to the Welsh Affairs Select Committee a few weeks ago undermined his own case for a Severn Barrage:

To my surprise, Peter Hain did the same the following day at the Energy and Climate Change Committee. It seemed like a peculiar strategy for the project’s principal cheerleader to dismantle his own side’s viewpoint so skilfully.

Peter Hain said that it would “clearly be necessary” to un-designate the Natura 2000 habitat in order to proceed with the project. This is something that has never happened before, and would need to be agreed by the European Commission. Let’s remember that Pembroke power station – itself the centre of a European Commission infringement procedure as a result of a Friends of the Earth Cymru complaint – related to one Special Area of Conservation. The Severn barrage would impact on 19 Special Areas of Conservation, 5 Special Protection Areas and 5 Ramsar sites. Suffice to say that un-designation would be contentious. Compensatory habitat would be of a scale 30-60 times greater than any previous scheme in the UK.

He points out that in three years’ time, it will be cheaper for households to generate their own electricity on rooftops than it will to buy it from the grid and concludes:

The siren call of the Severn barrage, a 10-mile concrete wall in the Severn estuary producing incredibly expensive electricity, destroying priceless habitats, making fish populations extinct and increasing flood risk in Wales. That’s the side of the story that Hafren Power don’t like to mention. And that’s why the Severn barrage will remain science fiction now and forever.

Under the heading 'BBC not reporting good news' Ffranc Sais highlights some of the most recent successes of the UK Coalition Government. He points out that applicants to university from disadvantaged backgrounds have increased under the new tuition fee regime, that apprenticeship starts have doubled over the last four years and that the decision to sell off 15% of the public forest estate has been rescinded by a Liberal Democrats Minister and the budget restored. I particularly liked this graphic: 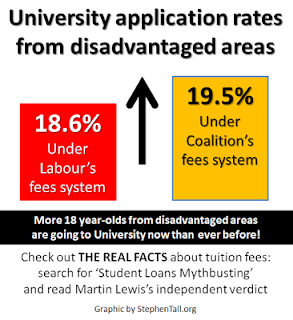 Finally, John Dixon challenges those who want to put a nuclear power station on Ynys Mon to also stand up to the consequences of that decision:

There’s a similar problem with nuclear power. Building new nuclear power stations depends on there being facilities available for storing, processing, and disposing of nuclear waste. It’s equally dishonest for proponents of Wylfa B to make – as many seem to – the implicit assumption that those facilities will be available “somewhere else”. Supporters of Wylfa B would sound much more honest to me if they were also lobbying to have nuclear waste stored and dumped in Ynys Môn. I won’t hold my breath on that.

It is an interesting argument. I don't expect anybody to take up the challenge.