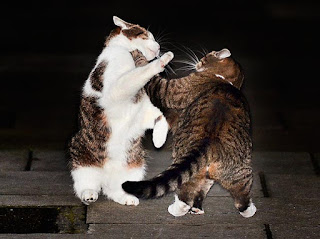 As this a day for the animals I cannot let the moment pass without mentioning the fight that broke out yesterday between Number 10 Downing Street and their neighbours in Number 11.

Of course we are well used to the Prime Minister and the Chancellor of the Exchequer falling out during the time of the previous Labour Government, but that has not been the pattern so far. However, yesterday's spat was not between Cameron and Osborne, but their cats. The full story is here.

In this instance, Osborne's cat, Freya emerged triumphant. I have no doubt that this will not be the end of the matter. Expect further disagreements in months to come.

A spokeswoman for the PM would only say the pair "co-exist". But she added: "I'm not going to get into the adventures of our feline friends in Downing Street."  Very wise.