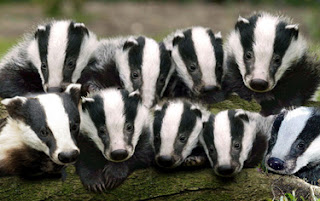 I don't usually post spoof articles here but this one on the Newsbiscuit site proved irresistible. In their conceit that sections of the M5 and the Severn Bridge have been shut due to thousands of badger refugees fleeing in convoy from villages in Gloucestershire and Somerset over the border to Wales, they have hit on several important truths.

The main one of course is that the badger cull is not supported by the science and is likely to cause mass perturbation and the consequent spread of bTB to other areas. There are other points about asylum but I will let you work that out for yourselves:

Badgers from both counties began to flee following the news that armed Government agents were advancing deep into their territory to perform a 70% cull.


Whole badger families took to the roads as the threat of persecution and genocide escalated. Mothers and fathers comforted their young through driving rain as the procession advanced towards the Welsh border. Carrying white flags they ignored demands from angry toll booth operators for their crossing fees. Some badgers spoke of older and infirm badgers succumbing to the wheels of impatient juggernauts or simply lying down exhausted on the hard shoulder.

Michaelwood Service Station was reported to be besieged as angry badgers queued and clawed for provisions in a desperate bid to fuel their journey towards the Welsh border. Starbucks denied that they were cashing in on the crisis by adding 25% to a standard cappucino.

In a response to the situation David Heath, the Agriculture Minister, refuted suggestions that the Government was creating a politically sensitive cross-border situation. ‘I would like to reassure the little black-and-white creatures which everybody loves, that they are not all under threat,’ he said. ‘Nobody wants to see a single badger killed, however we do promise to perform a clean kill for hundreds more and, on this basis we urge the nation’s favourite wild creatures to return to their homes.’

A spokesman for the UN High Commission for Refugees (UNHCR) said, ‘We are extremely worried. If badgers want to flee the county because they feel persecuted, they should have the right to do that. The Security Council is taking a very close interest in the welfare of British badgers and will be holding an ineffective and unresolvable emergency session about the British government’s crimes against badgers.’

A spokesbadger from Dark Wood in Somerset described the precarious and violent situation inside the county. ‘This is a very worrying time for badgers but one which we shall overcome. We are an enduring lot, and we may move out for a time, but we wait, and are patient, and back we come. And so it will ever be. Snuffle snuffle.’

Meanwhile gift shops across Somerset are worried that, despite an increase in supplies public opinion will create a decline in the sale of souvenir shaving brushes and badger tail key rings.

Tiime for a rethink I believe.

Comments:
that photo looks like the badgers were arranged in a group to copy that sketch by Senn, maybe I'm wrong